Decisions regarding who gets to take care of the children in a divorce or custody battle are never easy ones. These decisions involve who will be making major decisions for the children, as well as where the children will live.

While Colorado courts prefer that both parents be actively involved, some situations do exist where one parent is given sole decision-making responsibilities over the parties’ children.

Decision-making can either be joint or sole, and this term describes who will make the major decisions for the child, concerning all medical, educational, religious and other decisions. Parenting time is the schedule or time that the child will spend with each parent, called a parenting plan.

No one situation is the same. Courts ideally would like to see both parents actively involved in the child’s life, but unfortunately, sometimes that cannot be the case. While joint decision-making is the norm in Colorado, other arrangements can be made if it is found to be in the best interests of the child.

If the child spends an equal number of overnights with both parents, the parents are said to have joint parental responsibility. If anyone has 183 overnight (or more) with the child, they are considered the primary residential custodian. This is the parent with which the child lives with primarily.

Parents are able to petition the court to become the primary residential custodian. If the parties do not live close in proximity to each other, and they wish to keep the child in one school district and avoid disruption in daily routine, it often makes sense for the child to be with one parent more than the other. Colorado courts want to see parental involvement from both parents, but this can be done through a flexible parenting time schedule and open communication between parent and child. 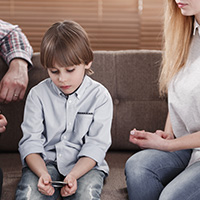 As opposed to being primary residential custodian, Colorado courts prefer to give parents joint decision-making responsibilities for the child. The courts prefer to not give one parent control over all major decisions on behalf of the child. If one parent wants to have sole decision-making responsibilities, that parent will need to prove that the other parent is not fit to be able to make these decisions. It can be a hard burden to meet, but it is possible in certain situations.

That brings the questions of what factors play into whether one parent is given sole decision-making responsibility for the children.

For instance, if there has been a history of illegal substance or alcohol abuse, courts may believe it is best that the parent suffering from this issue not be given the authority to make these big decisions. If the parent also has a history of abusing the child, physically, emotionally or sexually, the other parent may be given the right to make decisions. Also, if the parent is not competent or able to properly make these important life decisions, the court may choose to have the other parent make the major decisions for the child.

It is ultimately up to the parent seeking to have sole decision-making authority to prove these factors, and the other parent is able to dispute the evidence submitted.

Divorce is complicated and can be a stressful matter for anyone, and we are here to help you through the process. Call the Law Offices of Kelli J Malcolm today for your free consultation at 720-261-7287.

Attorney Advertising. This website is designed for general information only. The information presented at this site should not be construed to be formal legal advice nor the formation of a lawyer/client relationship.